The Atiles Sisters
When siblings, Elena, Miranda, Sofia and Kayla join voices, they're known as The Atiles Sisters. These homeschooled young ladies range from 12 to 18.  Beyond a cappella, you'll find this artistic family singing, dancing and acting in local theatrical productions. For the last 3 years, these siblings have been performing arrangements of spirituals and hymns at churches & nursing homes, to patriotic songs ("The Star Spangled Banner" or "God Bless America") at professional sporting events. They are excited to make their SingStrong debut! Twitter and Facebook:  @AtilesSisters

The Blue Notes
The  Blue Notes have been around for a little over two years. They are a first for Baruch College. Defying the odds, this group in its infancy has been able to overcome the obstacles of originating in an institution dominated by studies in accounting and finance, and they're still going strong! Watch out guys, the Blue Notes are here, and they mean business! Facebook:  @baruchbluenotes      youtube.com/channel/UCt8Zqh4iaH7sp8_ZTdAJb8w

Completely Different Note (CDN)
Established in 1999, CDN is UConn's oldest all-male a cappella group. Their repertoire ranges from R&B to Classic Rock, from Maroon 5 to Billy Joel. CDN likes to stay true to our name and keep things "completely different". In the past few years alone they've traveled the East Coast, the Great Lakes and everywhere in between. CDN looks forward to growing their name, their fan base and raising money to produce their fifth studio album! They are honored to make their SingStrong debut!    @CDNUConn at Facebook and Instagram. 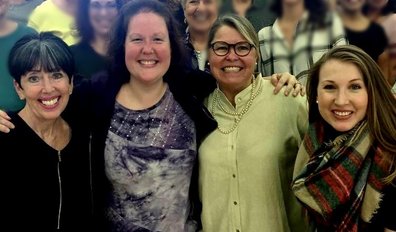 Harmony
Sarah, Kim, Harriette, and Leigh Anne, Harmony Quartet has been together since October 2016. While there is some individual experience and championships within the group, they are very new and excited to share their love of singing, barbershop harmony, and each other with the world. They will be competing in their first NY/NJ Regional Competition in April 2017, and are looking forward to all that lies ahead! Not only is this their SingStrong debut, but this is also  their very first public performance!

Howl
Since 2014, the women of looping duo HOWL have been delighting audiences in New York and New Jersey with their uniquely lush sound. Allie Reeves and Honor Friberg use live looping technology to layer vocal instrumentation, vocal percussion and harmonies in real time to create enchanting and innovative arrangements of original songs, covers and mash-ups. They perform songs ranging from originals, to contemporary pop hits, to songs from their childhood musical roots in the 90s. This year HOWL performed as the opening act for Deke Sharon's Vocalosity at Bucks County Playhouse, were featured on Acaville Radio's #TheSpotlight, and are looking forward to having an original song featured on an upcoming episode of the podcast "The Brothers Mysterium". They are thrilled to be performing for a second time at Singstrong NY!    @HOWLacappella at Facebook and Twitter. 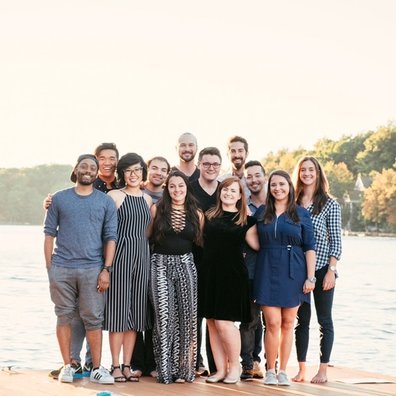 The Lost Keys
The Lost Keys are a New York based co-ed a cappella group, bringing a soulful sound to contemporary and classic pop music. From flashmob weddings to Rockwood Music Hall, this group has become a staple in the aca-music scene. 2015 marked the release of their debut EP, UNLOCKED, named one of the Top Albums of the Year by RARB, including two songs on the "Top songs of the year" list. UNLOCKED also received two CARA award nominations for Best Professional Arrangement for a Non-Scholastic Group and Best CAL song. The Lost Keys have also received awards for Best Soloist and Best Arrangement at the New York Regional Harmony Sweepstakes competition. In April 2016, they were thrilled and honored to open for The Doobie Brothers on the Grand Ballroom stage of the Waldorf Astoria as a part of a benefit fundraiser for NewYork-Presbyterian.  www.thelostkeysnyc.com   Twitter and Instagram : @LostKeysNYC   Facebook: @TheLostKeys

The New York Belles
The New York Belles formed 10 years ago at Five Towns College. Samantha Priore , Eden Orshan and two friends from school started "The Jingle Belles" , primarily performing at holiday functions. The name has changed to the New York Belles and they now perform at all types of events! The current line up includes Renee Orshan (Eden's sister) and Ameerah Kindle from Denver Colorado. The four have become peas in a pod -just what a  group needs for great blend. The ladies are excited to make their SingStrong debut! 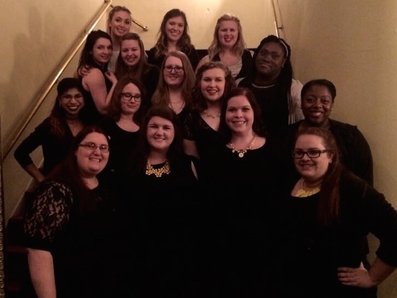 Martini Glass
Martini Glass A cappella is a semi-professional group from the greater Danbury, Connecticut area. They are comprised of twelve ladies and one gentlemen, affectionately known as the olive in the martini. They started in 2004 at Danbury High School and many of their members are current or alumni students from Western Connecticut State University. With a wide range of styles in their repertoire, from jazz and pop to Broadway and gospel, there is sure to be something for everyone when they perform.  Twitter:  @martiniglassaca   Facebook  @martiniglassaca   Instagram: @martiniglassaca

MIT OHMS
The MIT Ohms are MIT's electrifying South Asian A Cappella group. They enjoy singing mash-ups of Western and Bollywood songs, and they recently released their first album, Resistance. available on Spotify, iTunes, Google Play, or at ohms.mit.edu! This is their SingStrong debut!
​@MITOhms at Facebook. 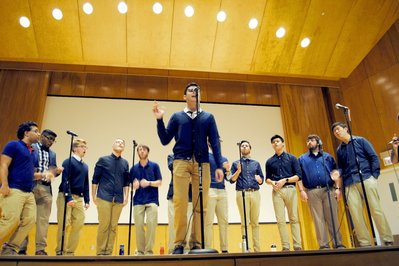 The Stony Brook High C's
The Stony Brook High C's is Stony Brook University's original a cappella group, and only all-male a cappella group. 13 years strong, its active alumni base includes over 50 members and features a quarter-finalist of the 2015 American Beatboxing Championships. Today, members include future engineers, biologists, and educators who come together to make exceptional music with heart, soul, and an epic beat.  Twitter: @sbhighcs   Facebook: @sbhighcs   instagram: @sbhighcs       youtube: sbhighcs 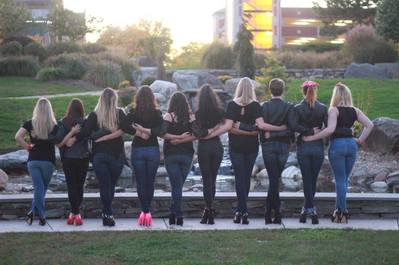 Too Good For Instruments (TGFI)
Based in New Britain CT, TGFI is a fun, fierce, all-female a cappella group from Central Connecticut State University. They say, "We may look cute in our all black everything and pink accessories, but whats really beautiful is our passion to share our love of music with others."   ​@tgfiacappella  at Twitter and Instagram.