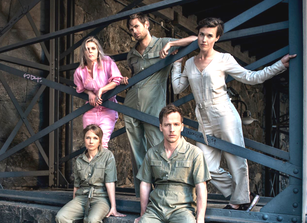 Rilton's Vanner
Hailing from Sweden, their name means "Rilton's Friends" and they truly have lived a lifetime together!  Founded by schoolmates back in 1999 in Stockholm Sweden, they've since released five albums and made over 1,000 appearances in Sweden, Norway, Finland, Germany, France, Russia, China, Japan and the USA.  Their sound is Nordic Pop, the compositions are boldly original and their awards are numerous. From perfect reviews at The Recorded A cappella Review Board (RARB) to a CARA Best World Album, they have become recognized for their mesmerizing sound. They are excited to make their SingStrong debut, and their only scheduled US appearance!
​[Performing Sat 7PM and Sun 2PM] 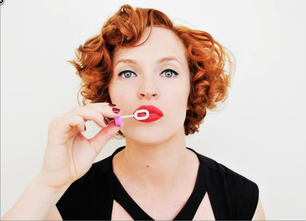 Grace McLean
Famed composer Jason Robert Brown describes this edgy live-looper as "unlike anything I have ever experienced in a theater in my life. At every moment, there is a fierce pioneering inventiveness." Huff Post calls this NYC-based live-looper, "Electrifying!"  Fans know her from Broadway musical, "Natasha, Pierre & the Great Comet of 1812" as well as her season-long run at Lincoln Center starring in the original musical which she composed, "In the Green". She is the 2017 recipient of the Hunt Family Emerging Artist Award through Lincoln Center. Manhattan User's Guide writes, "This pop and jazz singer writes seriously infectious melodies with seriously antic lyrics. Her voice can raise the roof, or she can slide off a note and break your heart." Compared to artists like Kimbra and Julia Easterlin, once McLean begins, you won't be able to take your eyes off her for a moment.  She loops layer upon layer of live harmony over her leads, all the while keeping the audience focused on her incredible singing and songwriting. It's only after the incredible journey, that one marvels at her mastery of the technology. She performed at SingStrong DC and Chicago; this marks her debut at SingStrong NY!
​[Performing Sat 7PM and Sun 2PM] 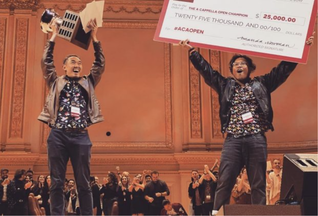 Spiderhorse
World Beatbox Champions, two-time American Beat Box Champions, Grand Beatbox Battle Champions, and first place Champions of the ACA-OPEN, Spiderhorse is truly the dynamic duo of beatboxing with harmony! These two members of the Beatbox House had worked as tag team partners for years, but as the ACA-OPEN approached, they decided to take their skills to the next level. Chris Celiz traveled with Gene Shonozaki to Europe, months prior to the competition to ensure their routines were perfected.They tightened their performances on a daily basis as the competitions approached. It's hard work that paid off to the tune of a $25,000 first place award. Their win is not only an achievement for the duo, but it also marks a cross-over point for the beatbox community itself. As winners of one of the largest awards in the a cappella community at large, Spiderhorse have helped bring a national focus to the expanding artistry of beatbox. Chris has performed and taught at SingStrong, but this marks the first time that the two will perform on the SingStrong stage as Spiderhorse!
​ [Performing Sat 9:30PM and Sun 2PM] 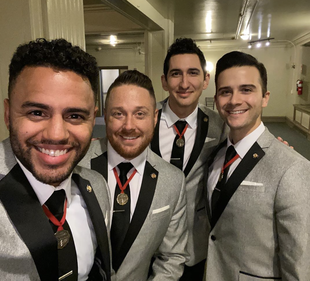 Midtown
This barbershop quartet is based out of Manhattan NY, of course! Midtown is currently ranked as the 5th best barbershop quartet in the known Universe! Well-versed in pop, jazz, barbershop, gospel, and musical theater, their high-energy show takes the audience on a ride that will leave them wanting more! From the National tour of "Fun Home" to singing in Disney's Dapper Dans and Voices of Liberty, to 12 years as army vocalist in the National Guard, the members of this powerhouse ensemble boast incredible real-life experience to match their multiple degrees in vocal pedagogy, jazz studies and theatre. Come see how thrilling the combination of talent and smarts can be! This marks their SingStrong debut!
​[Performing Sat 7PM and Sun 2PM] 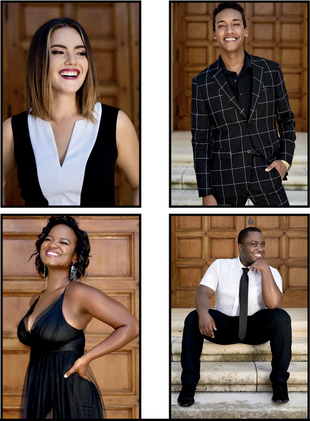 Resolve
This young, jazzy quartet are the National Harmony Sweepstakes Champions as well as the NY Harmony Sweepstakes Champions! This vocal jazz quartet is based out of Central Florida where they work with a little company called Disney! You may have seen their members in the Dapper Dans, Voices of Liberty or  Finding Nemo - The Musical -all at Walt Disney World. As a group they are inspired by legendary vocal groups like the Manhattan Transfer and the New York Voices. These four young vocalists build on timeless pieces of music from all genres and work them into a vocal jazz style that is the harmonic equivalent of dense chocolate mouse cake -rich! Their video releases have generated thousands of views, and they have been honored to sing with jazz greats like Tiffany Coburn and Michelle Mailhot, and to perform original arrangements penned by Sam Robson and Erik Winger. This marks their SingStrong debut!
​[Performing Sat 9:30PM and Sun 2PM] 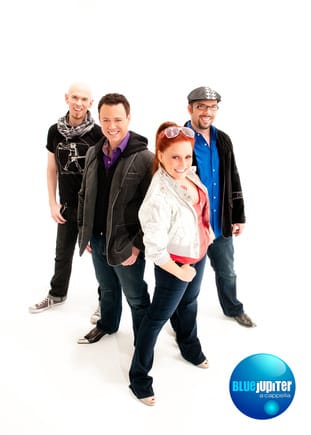 Blue Jupiter
Broadway Records recording artists, Blue Jupiter are back! (From where? Most recently, a state sponsored tour of Russia!) You may recognize Blue Jupiter's lead Diana Preisler from her starring role in the internationally syndicated a cappella TV Show, "Pitch Slapped," on Lifetime TV! The group gained national fame as the voices of Oreo Cookie, Nokia and Nickelodeon. This NYC quartet has toured the world from Alaska to Florida, NY to Hong Kong, Cali to Siberia -and even on the high seas as Royal Carribean headliners. They've worked  with famed producer and American Idol judge, Randy Jackson, sharing the stage with artists as diverse as Pentatonix, Take 6, The Roots, 3rd Eye Blind, Trey Songz, and Livingston Taylor, as well as almost all the winning groups from all seasons of NBC's "The Sing-Off". They've been seen by millions on Oprah, Huff Post, College Humor, and VH1's Save the Music. CARA, RARB, WAMMY and Harmony Sweeps awards round out their aca-resume. Their style? Twisted Broadway meets high energy pop rock. Broadway baby, beatboxer, soulful tenor and human orchestra.  That's the out-of-this-world sound of Blue Jupiter!
​ [Performing Sat 7PM] 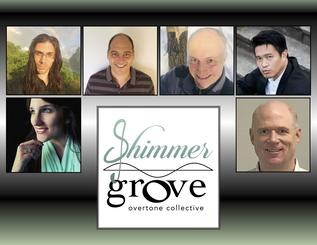 Shimmer Grove Overtone Collective
Overtone singing is the art of having a single singer perform more than one note at the same time. The floating harmonic notes the singers produce are often described as shimmering, angelic and flute-like. But there is a tremendous range of colors that can be created by even a single vocalist. Now, imagine what happens when 6 masters of this art form come together to create an overtone singing ensemble! Shimmer Grove is a multi-generational collective of overtone singers spread across the Mid-Atlantic and Northeastern regions of the United States. Six voices resound together in twelve-part harmony to share over a century of overtone singing experience with the world. These six voices are Rollin Rachele, Jim Cole, Dan Aramini, J.I. Canizares, Mary Saffell, and Robb Saffell. SingStrong attendees will see some familiar overtone singing instructors in this line up. This marks the ensemble's world premiere and their SingStrong debut!
​ [Performing Sat 9:30PM and Sun 2PM] 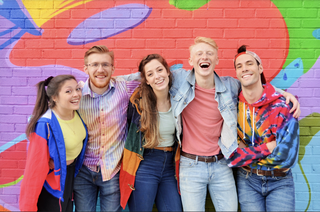 Highline
This New York-based vocal jazz quintet was founded in December 2017 and has since been recording music, creating videos (with a sizable following on youtube), and performing at concerts and events. Highline is committed to continuing the vocal jazz tradition established by groups like Manhattan Transfer, Take 6, The Real Group, and New York Voices. But they are also committed to modernizing the art form and making it fun and accessible for all audiences! Visit highlinevocaljazz.com for more information and to stay connected with Highline! This marks the ensemble's SingStrong debut!
[Performing Sat 9:30PM] 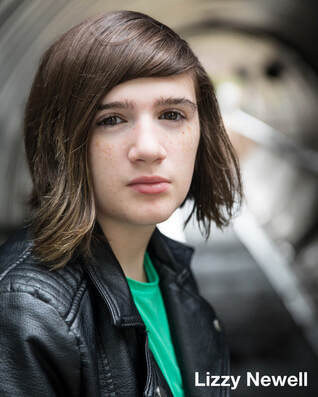 Ultrasonic
Lizzy Newell aka Ultrasonic, is a 12-year-old beatboxing phenom who burst onto the scene in 2017 at the American Beatboxing Championships. She made history as the youngest performer in the history of the Championships. She has also performed as a part of the SingStrong a cappella festival at Adelphi University, Blue Jupiter’s Aca-Party at The Green 42 in NYC, The Lupus Research Alliance’s Walk With Us to Cure Lupus at the Met Life Stadium and the Astra Kulture Haus in Berlin, Germany during the Beatbox Battle World Championships. Audiences may recognize Ultrasonic as the beatboxer with Acapop!KIDS, a new kids a cappella group created by the producers of Pentatonix. You can follow her at IG: ultrasonicbeatbox FB: ultrasonic beatboxer and Youtube: Ultra Sonic
[Performing Sat 9:30PM] 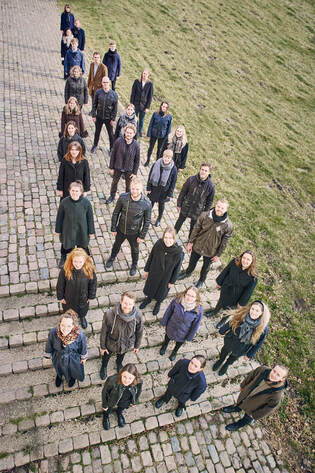