Resound
Ariana Grande tweeted " their voices... the arrangement.... their musicality.... i can't tell u how many times i've watched this. i luv them.”  They've been featured across the country on ABC, The Examiner and many other news outlets as the hottest new sound in a cappella music.  Based in Virginia, this young trio has already developed a reputation for their gospel style, stunning dynamics and soaring solo deliveries. Cheer on the SingStrong debut of this incredible new group! [TBD]

New Tradition Chorus
New Tradition Chorus brings barbershop to life, performing creative arrangements under the award-winning direction of Jay Giallombardo (International Gold Medalist for his quartet, Grandma's Boys). In New Tradition's 19 appearances at the International Chorus Contest, they've won a medal every single time, making them one of the most decorated choruses in the history of the Barbershop Harmony Society. [Performing Sun 2PM]

Cartoon Johnny
From classic soul to modern alternative, this DC area vocal band performs favorites and originals. This sextet is one of the only groups to have won the Harmony Sweepstakes in both DC (Mid-Atlantic) and New York. They've headlined ACappellaFest Detroit and performed with Marvin Hamlisch at the Kennedy Center. They've won multiple Wammy Awards for "The More The Merrier", an album benefitting the Leukemia & Lymphoma Society. Cartoon Johnny are regulars at SingStrongDC, but this marks their Chicago debut and they couldn't be more excited to join our midwest aca-family! [Performing Sat 7:00PM and Sun at 2PM]

Traces
As seen on the most recent season of NBC's hit show, The Sing-Off, Traces is the first female group to win both the New York and Boston Harmony Sweepstakes. This soulful quintet boasts tight harmonies, an unbelievably low female bass, and some truly powerful vocal percussion. With influences ranging from Caribbean and African to Gospel and R&B, Traces has a style all their own. These New York-based ladies are excited to return to SingStrong Chicago! [Performing Sat 7:00PM and Sun at 2PM] 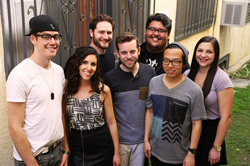 Level
With a distinct pop/jazz style and a roster of world-class vocalists, Level has quickly earned a reputation as one of the most unique a cappella groups in the Los Angeles area. The group is comprised entirely of performers and arrangers from all seasons of The Sing-Off, all who boast impressive individual credits. Between them they have racked up a Grammy award, multiple platinum records, and appearances and production work on American Idol, The Voice, Glee, Duets, Pitch Perfect 1 and 2, and Whiplash. They’re so excited to be performing at SingStrong for their very first festival performance! Please check them out online at twitter.com/levelacappella and facebook.com/levelacappella  [Performing Sat 7:00PM and Sun at 2PM] You can also catch Level's Robert Dietz (beatboxer, Sing-Off Arranger) and and Allie Feder (Pitch Perfect 2's "Evil Allie") as ACA-IDOL Judges on Friday at 7PM! 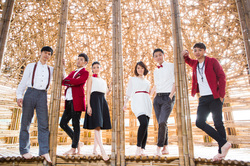 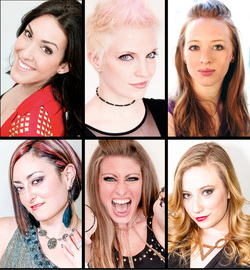 Stiletta
Winners of the 2015 Mid-Atlantic Harmony Sweepstakes, Stiletta also took Audience Favorite and Best Arrangement. This NYC-based, all female sextet is known for combining pop leads, rich harmonies, and hip-hop dance moves. Beatboxer, MC Beats made a show-stopping entry into the beatbox community in 2012 when she was ranked 3rd best female beatboxer in the world at the Beatbox Battle World Championship in Germany. Stiletta members boast multiple off-broadway credits, and everything from WAMMY and CARA awards, to original cast recordings for “Memphis” and “Dora the Explorer”.  Stiletta's director, Judy Minkoff is already well-loved at SingStrong as both the DC and Chicago Single Singers director, and the group is excited to show their SingStrong family that they have the moves, the grooves and even the shoes!  [Performing Sat 9:30PM]

Ball in the House
This Boston-based R&B/soul/pop group has been called the "hardest working a cappella group in the biz" averaging over 250 shows a year. They shared the stage with The Beach Boys, Fantasia, The Jonas Brothers, Gladys Knight, Lionel Richie, Blondie,The Temptations, Smokey Robinson, and many more. The voices of Cool Whip, they appeared on NPR,  TODAY Show, America's Got Talent, The Daily Buzz, and the Philadelphia 4th of July Parade. From CARAs to ACAs,  hit songs to an APCA Band of the Year Award, "BiTH" is a must see! [Performing Sat 9:30PM] 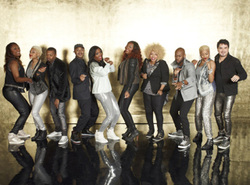 Ten
Featured competitors on NBC's The Sing-Off, Ten offers an explosive, soulful sound. Hailing from Dallas, Texas, these singers have leaped from back-up to spotlight in the blink of an eye. Wowing the judges with a deep groove and riff-tastic solos on "Tell Me Something Good" and "Hot in Herre", the group has already become fan favorites in the a cappella community. Combining influences of gospel, soul and funk, this mixed ensemble just might go all the way! Whether they do or not, they're thrilled to be making their debut a cappella festival performance at SingStrong! 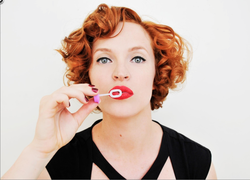 Grace McLean
Huff Post calls this NYC-based live-looper, "Electrifying!"  Manhattan User's Guide writes, "This pop and jazz singer writes seriously infectious melodies with seriously antic lyrics. Her voice can raise the roof, or she can slide off a note and break your heart." Sometimes compared to artists like Julia Easterlin, once McLean begins, you won't be able to take your eyes off her for a moment.  She loops layer upon layer of live harmony over her live leads, all the while putting the audience's focus on her incredible singing and songwriting. It's only after that one marvels at her mastery of the technology. McLean made her mark in theatre and indie rock. SingStrong marks McLean's a cappella debut. 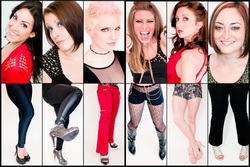 Stiletta
This NYC-based, all female sextet is known for combining pop leads, rich harmonies, and hip-hop dance moves. Beatboxer, MC Beats made a show-stopping entry into the beatbox community in 2012 when she was ranked 3rd best female beatboxer in the world at the Beatbox Battle World Championship in Germany. Stiletta members boast vocal and dance credits that include everything from CARA awards to original cast recordings for “Memphis” and “Dora the Explorer” to performances with Atlanta's "Infinite Movement" hip hop dance company, the College of William & Mary's "Tribal Dancers", and multiple off-Broadway shows. 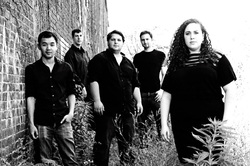 The Funx (featuring American Idol's Nate Tao)
The Funx are a TV supergroup, featuring talent from NBC's The Sing-Off as well as the incredible, soaring tenor of Nate Tao from American Idol. With arrangements and vocal percussion from Sing-Off arranger, Robert Dietz, winner of multiple CARAs for production, performance and arranging, this group has a full arsenal of a cappella weapons including the impressive Ariel Arbisser, winner of the 2010 CARA for Best Solo. Long-time collaborator, Crawford Doran and singer songwriter, Harry Nichols round out this pop/soul vocal band that began in Ithaca, NY and now hails from across the US and Canada. Fresh off their inclusion on CASA's 2013 SING, they are excited to return to SingStrong! 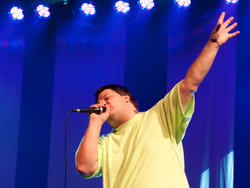 Fii
Hailing from Austria, Fii's beatboxing and reggae-tone looping garnered him international fame when he was featured on both Germany's Got Talent and the X Factor Germany. In the US, fans know him from his appearance at The Los Angeles Music Awards as well as several SingStrong appearances.  This playful crowd favorite returns with new, all-original material that will make audiences smile and dance. Sometimes billed as a musician and sometimes as a comedian, Fii creates a performance that's all his own! 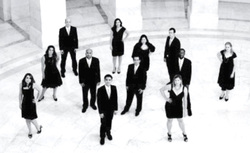 Capital Hearings
Since 2010, this classically-based, mixed ensemble of 12, has been largely performing at high end, private events. But with the release of their album, "Opening Statement", they've begun making waves in the a cappella community. The group's members have sung at both Carnegie Hall and the Kennedy Center, and the group is currently the Ensemble in Residence at All Souls Memorial Episcopal Church in Washington, D.C.. Their blend, balance and phrasing are rooted in classical music, but their distinctive sound comes from their bold introduction of pop, rock and folk influences.

The Alexandria Harmonizers
"Born" in 1948 in Alexandria, Virginia, the Harmonizers have become known the world over for their ringing barbershop chords. The Harmonizers have won the Barbershop Harmony Society International gold medal four times. They have also earned 11 other International medals. They've entertained at the White House for President Obama and the First Lady, and under the direction of renown barbershopper, and SingStrong instructor, Joe Cerutti, the ensemble has earned 2 International Bronze medals and its District Champion status. They are excited to make their SingStrong debut!